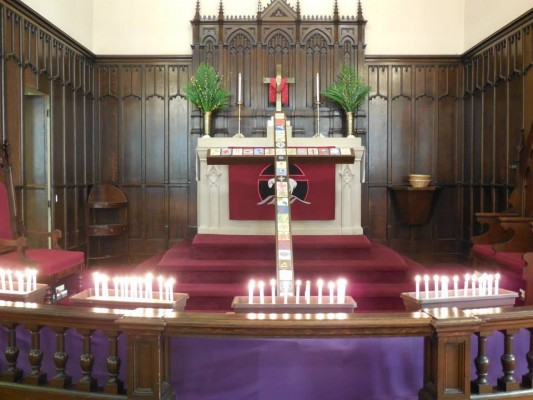 St. Peter’s Lutheran Church has been an integral part of life in the North Wales Community since 1776.

Our history goes all the way back to the Revolutionary War when people in Gwynedd gathered on horseback or on wagons to hear the gospel preached by Lutheran missionaries. In the winter months, they moved indoors to a log schoolhouse. Under the shade of the trees St. Peter’s began its history in 1772, not being chartered until 1776.

The first church edifice was the log schoolhouse on the hill near the cemetery. The hue of the stucco was yellow, thus causing the vernacular to name the edifice the “Old Yellow Church”. The Lutheran/Reformed structure could seat 500 worshipers. In 1866 the Lutheran and Reformed congregation split and both moved into town. The “new” building on 2nd and Church Streets was dedicated in 1869. The church has preserved this structure very well over the years, giving the sanctuary a classical, historic look.

The Sunday Church School, first organized as an English School, was in full operation by 1834. The former parsonage was erected beside the church and educational building in 1892. On June 29, 1987, the house was moved, all 72 tons of it, to its present location on the corner of Church and Second Streets. It is one of the nicest Victorian houses in North Wales and is now under new ownership. The modern addition was begun in 1987 and completed in 1988, containing a new office complex, parlor, and narthex.