2/27/21  Faith Matters: A need for racial equality in schools 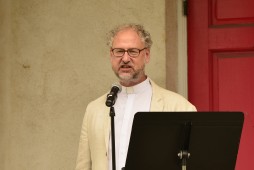 We are in the year of Luke. We are onto the third gospel. Listening to this early Christian witness we will get an earful about the Holy Spirit. The way Luke describes it, everything in the story of Jesus and everything in the development of the early church was directed by the invisible force of God. We hear that Jesus was driven by the Spirit into the desert. Now, as he returns to Galilee, he comes again “in the power of the Spirit.” If you are like me you ask: “Well, what does that actually mean?” We are sometimes led to believe that a “spiritual” leader must be charismatic, filled with supernatural strength and wisdom, a guru, a shaman, an enlightened one. Maybe that’s true or maybe not.

At least, I don’t picture Jesus’ homecoming as a triumphant show of spiritual power. The truth is, Jesus was likely pretty hungry, worn, and weak when he turned up on Main Street in Nazareth. He had spent 40 days in the southern wilderness; he had been fasting and praying; he had heard voices. He had been subject to an extreme spiritual confrontation and indeed, his very life had been on the line. Jesus in Luke 4? I see an exhausted, emotionally and physically drained human being on his last legs, barely making it home. Yes, he had been on a retreat, but my God, what a retreat it had been! “If you are the Son of God throw yourself down, for it is written...” according to Matthew’s description of the events. What a retreat!

So, before he went on his synagogue tour (the beginning of our reading for today), his mother Mary likely cooked him a few of his favorite meals, let him sleep for a while, and probably scolded him for not eating. He was around 30 years old now, but mothers don’t care about your age. This was Mary’s child looking like a homeless person! So, there may have been some recovery time and tender loving care. Then Jesus goes and speaks at various synagogues in his home region. The encounter with God’s adversary in the desert had changed him and he had something to say now; he went deeper. People appreciated his words. “Everyone praised him,” Luke writes. And finally, in his home congregation in Nazareth, things came into even greater focus. He attended Sabbath service there. The scroll of the prophet Isaiah was handed to him. We don’t know whether he looked for this particular passage or not, but what he read was in fact his vocation. The text, written a few centuries before, became very real at this moment: “The Spirit of the Lord is on me, because he has anointed me to proclaim good news to the poor. He has sent me to proclaim freedom for the prisoners and recovery of sight for the blind, to set the oppressed free, to proclaim the year of the Lord’s favor.”

You could hear the proverbial needle drop on the floor in the assembly. Luke says, “People’s eyes were fastened on him.” They sensed that this was not a normal Scripture reading. Somehow these words attained an immediacy they never had before, God speaking through this young man who had grown up down the street. It’s a little bit scary when God speaks to us directly. We prefer to have some buffer between us and God because it gets a little intense there… which explains the people’s reaction later on.

But here, Jesus receives his vocation for the third time and clearly with a commission toward serving people. This passage also corrects the common misperception that a spiritual person is removed from the world and its troubles, more in heaven than on earth, an ethereal being more than someone you can drink a beer with or a diet coke. The monk in the cell Jesus was not. No, this vocation was directing Jesus to get his hands and feet dirty, to step into human misery and lift up those who are suffering in body, mind or soul. To this day, that is also the vocation of the church and a reason why Social Ministry is at the heart of not what we do but who we are. Whenever we are drawn out of this world and want to escape – and God knows sometimes we do – the spirit will gently or not so gently direct us back to where we belong. Or, as Saint John put it: “The Word became flesh and lived among us.”

So, how can we be in touch with the spirit and do the things that followers of Christ are called to do: proclaim good news to the poor, lift up the broken-hearted, and so on? Is it as simple as just doing it? Some would argue that, but I say it may not be a bad idea for us to spend time alone with God, to open our ears to the God who calls us to minister to people, to be in touch with the one who calls us.

The Spirit of God will always lead us to a place of serving and ministering. It can be scary to feel, as Jesus surely did, that God really means you to step up. As for me, I am curious where the Spirit will lead our church community to serve this year. Sure, we will do some of the same things and be true to our long-standing relationships and commitments. But in the Kingdom of God, there is always an element of surprise. The moments when you hear the needle drop; when God speaks. If it can happen in that synagogue in Nazareth, it can happen here among us. May God open our ears!      Amen.