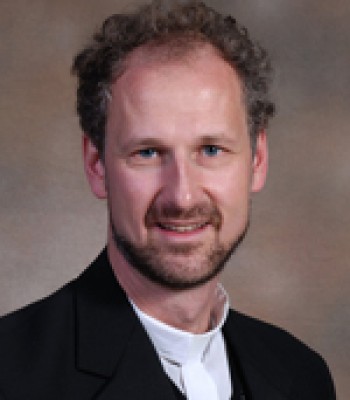 Pastor Wagner has an engaging preaching style and a good sense of humor. Some history: Pastor Andreas Wagner is a native German. He was born July 30, 1967, in the state of Hessen in central Germany and became active early on as leader in youth & children ministry. After graduating from high school he felt a strong call to serve God as an ordained minister. In 1986, he enrolled as a student of theology in a small Lutheran seminary near Frankfurt. Later he studied at the universities of Mainz and Munich in Germany. In 1994, he spent one year in a social ministry organization in Frankfurt, serving homeless people and assisting travelers at one of Europe´s busiest railway hubs. In 1996 he came to the United States for an internship.

Looking back, Pastor Wagner feels that the following year provided critical, life-changing experiences that had some marks of divine providence. He spent his internship year in an inner-city Lutheran congregation on Pittsburgh´s North Side. There, he fell in love with ministry American style: very people-oriented, creative, non-bureaucratic and to some degree entrepreneurial.

After being ordained in Germany he served in an urban and bilingual congregation in Philadelphia from 1997 -2007. Pastor Wagner’s special gifts and interests as a minister are comprised of writing, preaching, reaching out to the community, celebrating life events with people and adding creative and personal touches to the ministry. Under his leadership, the congregation led a successful three-year campaign to retire debt and create a position for Family Faith Formation (2014-2017).  Several ministries were birthed through volunteer leadership: Stephen Ministry (2013), Global Ministry Team (2015); the St. Peter’s Oktoberfest has been a mainstay in North Wales community life since 2008.  Pastor Wagner took a Sabbatical in 2016 and created the website www.modernliturgist.org, which shares many of his liturgical writings, most of which were first used at St. Peter’s.

The congregation has grown significantly under his leadership. Pastor Wagner likes the community of North Wales with its town character, history and community life. He believes that St. Peter´s is destined to be a spiritual stronghold of this community for a long time. Pastor likes to read and write, bike, cook and garden, and he also has a weakness for American Football. Fortunately for us, he hasn’t waved his terrible towel - a holdover from his Pittsburgh internship year - from the pulpit yet. Just wait!

← Back to St. Peter's Staff